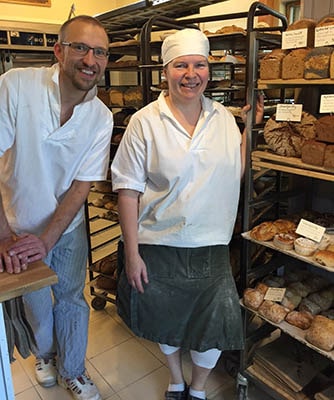 Grain never goes out of style

Starting a bakery is, in many ways, an exciting journey. There are many questions to take into account when establishing a profile.

What should our range look like? Who will our customers be? What raw ingredients should we use? These were some of the major and more obvious questions we considered before opening our place, Järna Bageri.

However, in addition to these questions, another concern was at least as important in setting up our new company. The matter of why we should even exist? Does a neighbourhood bakery even really matter in this day and age? Is bread still the vital staple food that it has been for millennia? Or is it rather, as many of today’s health gurus would argue, the root of all evil? Is it the reason that gluten intolerance and diabetes have grown into the widespread diseases they are today?

Many people close to us have, in recent years, fully or partially deselected bread and grain from their diets and related to us how this has made them feel better. This knowledge put our professional identity at stake. Could it really be true? We simply had to agree. Much of the bread that is made appears to be behind a number of public health problems. Even so, we were convinced that another path was possible. We were still convinced that bread and grain, despite the criticism, remain one of our most important and sustainable sources of food.

But we needed to present an alternative. For us, the solution was to invest wholeheartedly in what we saw as the bread of the future. A bread baked as it was baked before bread came to be regarded as a soul-less bulk food, inflated with air and poor in nutrients. Bread leavened with sourdough and baked with traditional grains.

With regard to the former – sourdough leavening – most people already seemed to be in agreement. Leavening bread with sourdough is crucial for it to have true quality, both from a nutritional perspective and in terms of flavour.

The latter, traditional grains, we believe will bring the great revolution in bread baking over the next few years. They have finally started to focus attention on the main raw material in our craft, the flour. Without fresh, nutritious and tasty flour as a base, all the finest baking skills in the world are meaningless.